A 4 hour live drawing by the infamous Jack Gobsmob and International Nobody. Event kicks off at 6pm @ Seven at Brixton this Friday 17th February 2012. Seven are relaunching their exhibition space, so there are sure to be plenty of other treats in store… 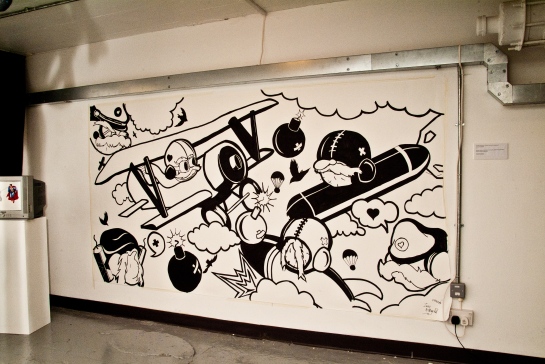 Jack Gobsmob is from London and likes punk music, low-brow art and comic books. He screen prints posters and flyers for gigs, slogans, and things that he has made. Jack bakes nice cakes, plays guitar in legendary south-east London punk band ‘Mummy Says I’m Special’ and helps out at Screaming Matriarch – an online art store specialising in vinyl and knitted dolls. If you meet Jack be sure not to look him directly in the face, he takes this as a sign of disrespect and can become violent. Always show deference.

International Nobody attempts to make pretty pictures for walls, ceilings and
skateboards often, without much luck but sometimes they turn out alright and people think about buying them.

East London based screen-printer and illustrator, International Nobody, creates vibrant and bold imagery in a style that the artist describes as ‘low-brow’, ‘subversive’ and ‘infantile’. Having completed 4 years of art school, International Nobody’s creative career began in the vinyl toy industry as a designer/maker after rejecting (and being rejected by) the fine art world.

For more information on TRANSITION COLLECTIVE check us out at
https://www.facebook.com/TransitionCollective
http://www.transitioncollective.wordpress.com